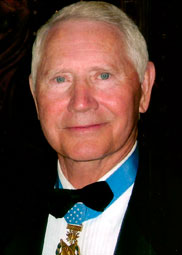 Leo K. Thorsness was born on February 14, 1932 in Walnut Grove, Minnesota. Inspired by his brother’s service in Korea, Thorsness enlisted in the US Air Force in 1951 and received his pilot’s wings and officer commission in 1954.

In 1966, he completed flight training for F-105 Thunderchiefs and was assigned to the 255th Tactical Fighter Wing, “Wild Weasels,” based at Takhli Royal Thai AFB in Thailand. As an aircraft commander, he was responsible for locating and destroying surface-to-air missile (SAM) sites in North Vietnam.

Thorsness directed two planes from the second element to head North while he and his wingman went south, dividing the defending gunners.

Thorsness successfully located and destroyed two SAMs, however, his wingman was hit by anti-aircraft fire and both crewmen ejected. In addition, both planes of the second element were attacked by MiG-17s and were forced to disengage and return to base, leaving Thorsness and Johnson to fight solo.

Thorsness circled the parachutes of the ejected crew continuously, following their descent andrelaying their position for search and rescue. Johnson soon spotted a MiG-17 off the right wing. Thorsness attacked and destroyed it with cannon fire as a second MiG closed in. Low on fuel, he outran the MiG and left to refuel.

Upon learning the rescue helicopters were having trouble retrieving the crewmen, Thorsness turned back despite his fuel shortage and destroyed one MiG on the way. With no ammunition left, Thorsness continued to draw multiple MiGs away from the rescue area, encountering multiple SAMs, antiaircraft guns, and MiGs alone for 50 minutes. Finally, four F-105s from Panda flight of the 255th TFW arrived to engage the MiGs in a dogfight and complete the rescue of the crewmen.

Critically low on fuel, Thorsness headed to the closest base at Udorn. Sixty miles out, with his tanks completely empty, he throttled back to idle and glided toward the runway, touching down successfully.

Eleven days after the MOH mission, and seven missions short of the end of his tour, Thorsness and Johnson were shot down and captured by North Vietnam. Despite an extensive rescue attempt, Thorsness remained a POW for six years, including a year

in solitary confinement and three years of intense torture. The Medal of Honor was awarded during his captivity, but it was not publicly announced until his release in 1973.

“[Thorsness] endured unspeakable pain and suffering because of his steadfast adherence to our code of conduct [during captivity] but Leo never let this experience break his spirit, and inspired the rest of us with his patriotism, perseverance, and hope that we would someday be free.”

Due to his extensive injuries, Thorsness was unable to continue flying after his release and retired at the rank of Colonel in 1973.

In 1974, he unsuccessfully ran for the US Senate in South Dakota against incumbent Democrat George McGovern, and later ran for an open seat in the US House against Democrat Tom Daschle who won by only139 votes following a recount.

Thorsness later settled in Seattle, WA, and was elected to the State Senate in 1988 where he sponsored bills asking the Federal government to declassify information regarding 30,000 missing American servicemen since World War I. He continued to push for MIA and POW causes throughout his life and served on the Board of Directors of the Congressional Medal of Honor Foundation.

In 2004, an endowed chair in leadership and ethics was named after Thorsness at the University of Richmond.

He published his autobiography, Surviving Hell: A POW’s Journey in 2008.

Thorsness died of leukemia in 2017 and was buried with full military honors in Arlington National Cemetery. He is survived by his wife Gaylee, his daughter Dawn and his two grandchildren.