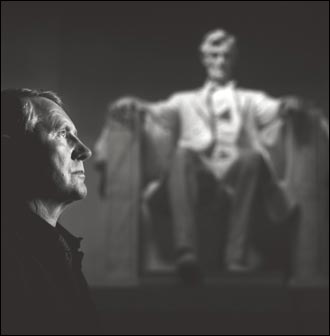 … It’s hard for me to convey how important freedom is. And I didn’t appreciate it and I don’t know that anyone can until they’ve lost it. It takes more realness. But people understand it’s important. And I hope more maybe that they understand that…it doesn’t happen automatically. It’s gotta be re-earned by every generation or at least every other generation. If you let it slip very long, it’s gone. ​

And I would hope that they would learn that from these experiences that leaders are… made, they’re not born. That you can come from any walk of life and become a leader…

I would hope that they learn that one person can make a difference. And it doesn’t matter what your status is. You can be the janitor at the local high school or you can be the guy that jumps in and pulls somebody out of the Potomac river when an airplane crashes there in the dead of winter. Or you can be a general that leads a battle…It’s a phenomenal country in that [if] you stop and think about it…it’s not a caste system. It doesn’t matter what your wealth and status [is]. You can excel. You can succeed if you work hard.

I hope they learn that life is sacrifice…Most of us don’t get something for nothing. You gotta either work hard and learn or whatever your job is, but that there are so many rewards if they do that…

I spent about a year in solitary confinement. And I decided what I was gonna figure out is how this nation could keep its freedom ad infinitum. And I started out by thinking well, we have to have a strong military. Well, that’s my field… Every so often somebody’s gonna test you. But to have a strong military, you’ve gotta have a strong economy, a strong industrial base, and have the wherewithal and so on. And I just kept going backward and backward and backward… I was there for about several months…milling this around.

And I finally said, I know what it is. In fact, I designed a medallion, a coin, and I had some made not so long ago. On the one side it says “freedom”. And I said what is, what can I boil it down to. One word is the flip side of freedom. And I finally came up with it – it’s “responsibility”.

If every one of us will accept our responsibilities as best we can – – and if you happen to be in a leadership role, help out those…who work with you and for us, we can go on forever…That is…so key to me…I spent a lot of time thinking about that responsibility. And I take that very seriously.